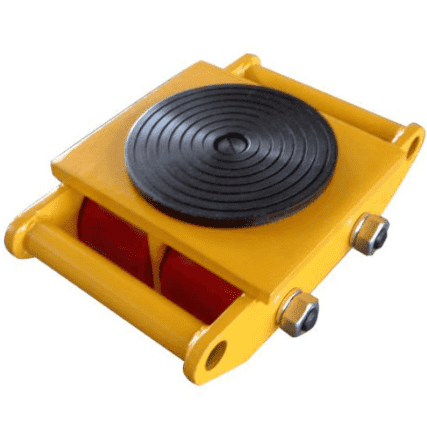 Industrial machine roller dollies with highest reliability, durability and safety standard. Front dolly comes with thrust bearing supported turntable allowing freely steering without needing to stop and reposition to turn. Pull by hand or attach to forklift for towing. Rolls heavy loads easily from point A to point B with less effort. The dolly system won't slip out from under the load - even under pulling and tugging. Distance between rear dollies is adjustable (use of connecting bar is recommended but optional).

There are 3 kind wheels for you to select:

Point roller dolly system ? How does it work

Users unfamiliar with using a three point dolly system will hesitate because using 4 dollies is more intuitive. However, using
a 3 point dolly system is in most cases more stable than using 4 dollies to transport a load.
If you are traveling over an uneven surface, your load will rock on 4 dollies just like a 4-legged chair on uneven ground.
When a load rocks on dollies that are not attached directly to it, the weight of the load is lifted off one dolly and it slips out.
This can cause obvious moving and safety problems.
Now, imagine a 3 +legged chair or stool; when it is placed on uneven ground, the chair will not rock. The 3 legged stool will
not lean or tip as long as the weight (Center of Gravity) is kept within the triangle created by the three legs.
Setting your load on three dollies will have the same effect: the load can not rock. Its weight has been evenly distributed,
pressing down onto the dollies at all times and thus keeping the dollies firmly in place.
Once your load is on three roller dollies, you can travel over uneven surfaces and not worry about the dollies slipping ?
even under pulling and tugging action.

The rollers can be used on smooth & rough floors, on floors with cracks & dirt, inside & outside. The elastic rollers mold
around obstacles and keep rolling whereby overcoming small obstacles easily by - No stop, up & over action required
like with other rollers. The material spreads out intentionally for keeping low floor pressure. The rollers have low break
out & low rolling resistance with low push-pull force and low manpower requirements.

Write your message here and send it to us